During his position at the University of Pennsylvania, he served on the U.S. President's Information Technology Advisory Committee, then as Chief Technologist for the Federal Communications Commission (2000-2001). In 2003, he retired from the University of Pennsylvania, and followed it up with a teaching position at Carnegie Mellon University. Reflecting on his various career and life stages, "I liked them all", Farber says.

"All the stages were different and interesting. Bell Labs and my academic career were wonderful. I had a great time in Washington, in Carnegie Melon. All were wonderful opportunities."
"It's very hard to choose, but if you ask me which my favorite is--probably Bell Labs." He mentions the beginning of his career which determined his future path, "It was a rare environment."

It's 2019. Farber is now in Japan and his adventure continues at the Keio University Cyber Civilization Research Center. 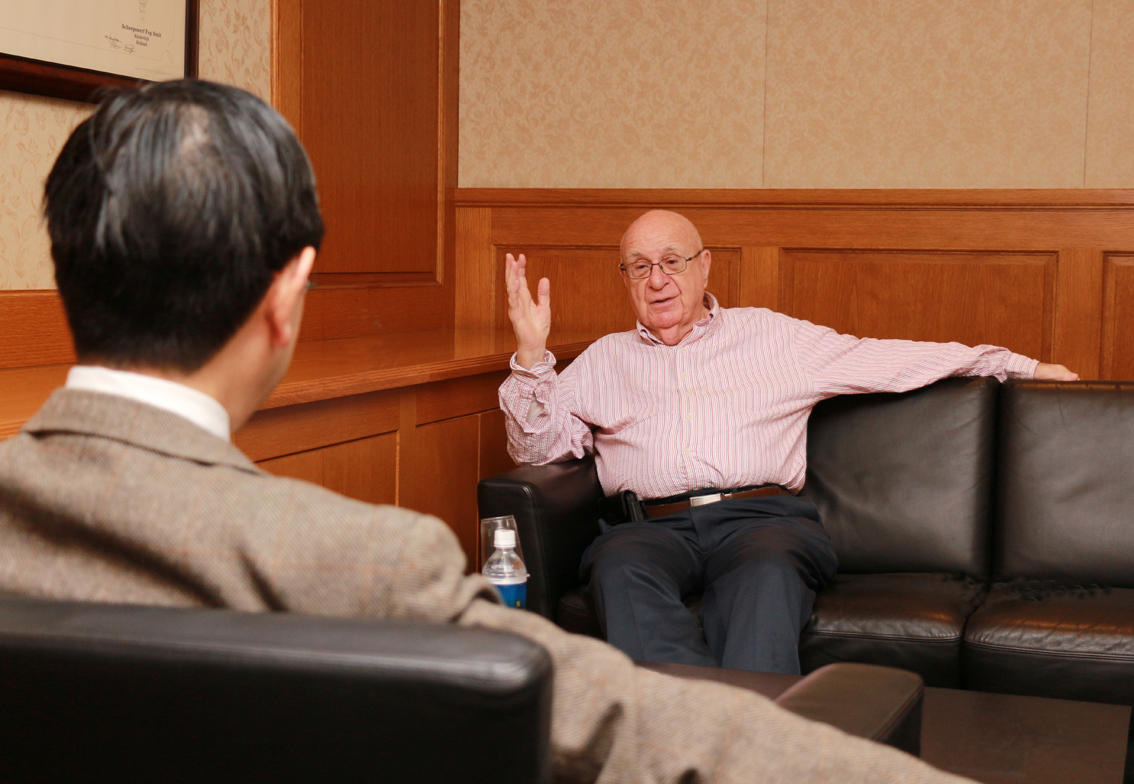 Farber's connection with Japan started relatively early on in his career. "It was when I was at UC Irvine, working for the Distributed Computing System (DCS) activities. I met Aiso [Professor Hideo Aiso, Keio University] when he was an assistant professor."
"Aiso then came and spent a month at DCS lab. Later when we gave the CSNet tape to Aiso, he gave it to Jun and Hide [Professors Jun Murai and Hideyuki Tokuda from Keio University] to install it in Japan. The timing was just right!"

These three professors are all known as pioneers in Japan--Murai is even known as the "Father of the Internet in Japan." In that sense, we can also say that Farber is the "Grandfather of Internet in Japan."
"Since then, I've had good contact with Aiso. A combination with my connections with him, and other activities, brought me to Japan very often. Probably close to 40 times before now. This has grown to more networks."

In Japan, Farber spent three months with the national digital library project with Professor Hiroshi Inose from Tokyo University. He was also on the advisory board of NTT Docomo for 4 years. When Shonan Fujisawa Campus (SFC) of Keio University opened in 1990, he gave the first public lecture for first-year students.

Farber is in Tokyo

"I've been also having good communication with Jun and Hide," Farber says. For a long time they had been trying to see if Farber could possibly come over, but it never quite happened.
"I was busy. When I went to Carnegie Mellon University, for those 5 years I was happiest working there. When my wife passed away, I decided that I needed to go back to the New York area where my grandchildren were."
"When I got a phone call from Keio saying, 'Would you like to come over?' I said 'yes!' It didn't take much argument. I always wanted to come back."
"I was in New York, thinking what to do after New York. Tokyo seemed like a nice place and I liked it while I've been coming here many times.... Now, I really like it even more than I did, finding that I almost feel like I'm getting to be a part of it, apart from the language problem, and that the people walk on the other side of the street," he laughs. 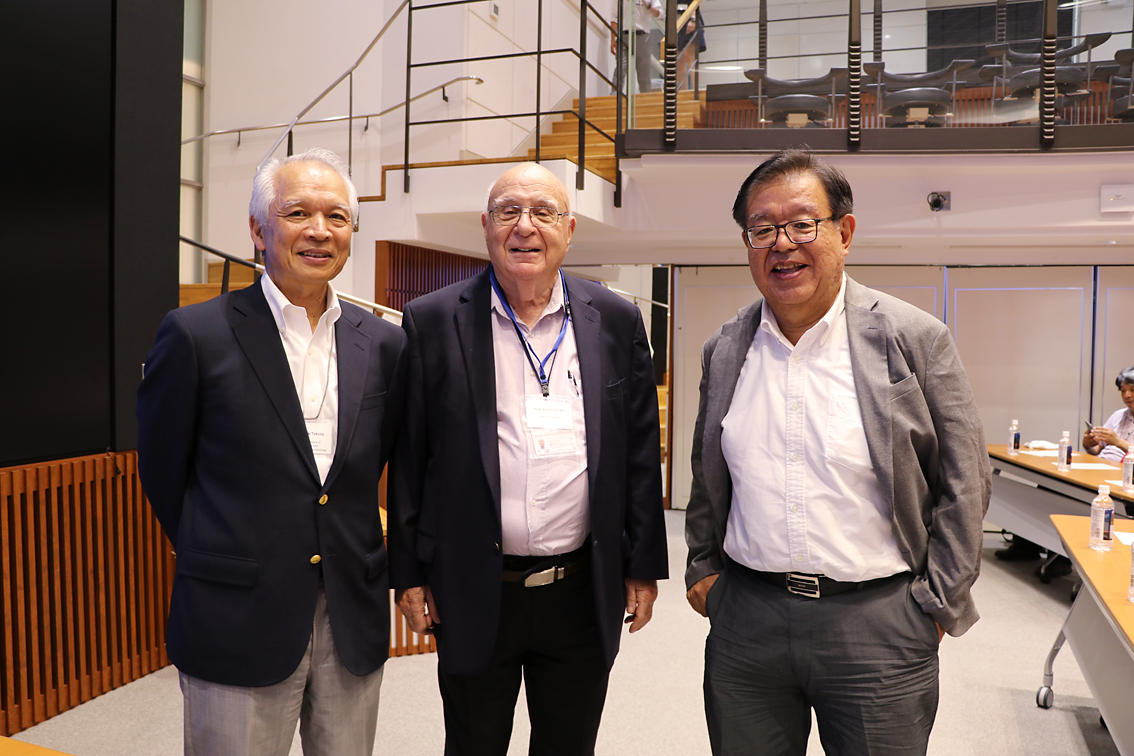 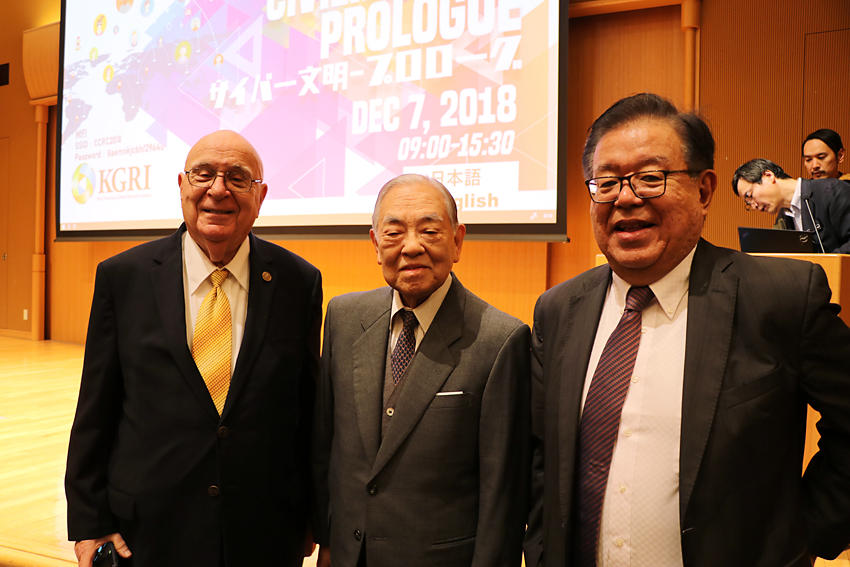 The Future of the Internet - It's time for a Re-design

Farber is now leading the Cyber Civilization Research Center in Keio University, which aims to rethink the existing governance, economic, societal, and technological planning of the current cyber civilization.

Looking at what's happening in the internet society, Farber says that we are "running into a big problem." "We did a very nice experiment, putting together a lot of stuff. It was a research experiment which suddenly became popular, so almost every piece was not necessarily designed to be secure or trustful, reliable enough for some activities," he says with alarm.
"The other thing is that the internet protocols were designed for a relatively low speed environment with relatively higher rates. The architecture and software we have seem not suited for the environment that we are going to face now and in the future."

As the Internet becomes no longer just a toy, but a critical part of life, "It's time to re-design. The Internet is now becoming as common as telephone was before. It's changed our social structure. We need to face the fact that we can't just go forward. We think like where are we going in 10 years, or how do we prepare? What we have now will not work. It's even going to get worse."

"This fact, at the same time, gives you a lot of opportunities for the future research." Farber introduces CCRC, while encouraging the researchers. "That's why we have CCRC, to try to work on and see what the future is. The activities of CCRC are an adventurous exploration of the field, which desperately needs to be looked at carefully. We have a lot of potential and I'm just getting good vibes from this step."
"Now that it's necessary to involve more people--better spread the wealth and news, get the students involved. But it's the right thing to do. We keep tripping along and so far, we are tripping in the right direction. And let's watch before it gets to be a problem. I think it's needed."
"The problem in the US is, you take the brightest students, and companies pull them out. We are now in the information age, and yet we are not paying huge amount of attention to ground floor researchers. What is going to change the culture? Is that virtual reality? I think that is a real open question." 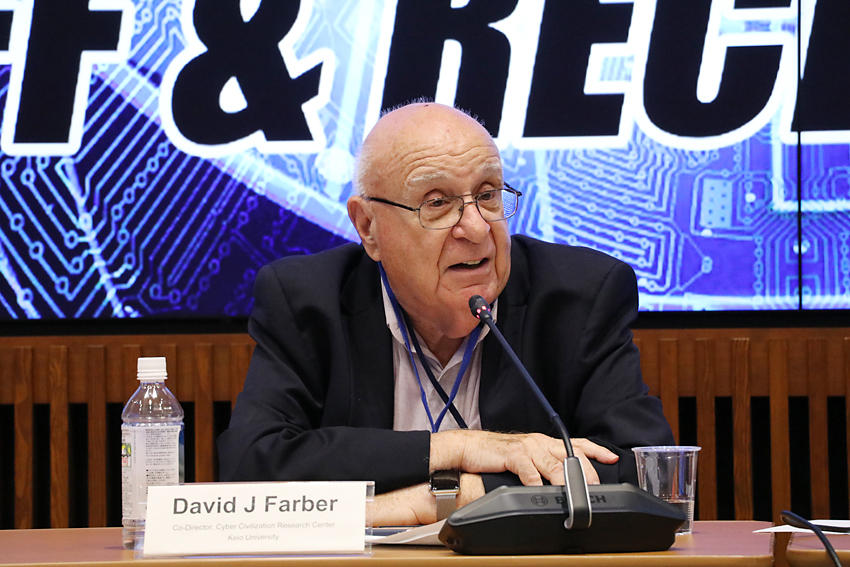 "If we continue to go the way we are doing it now, where we are using an insecure environment, that will put ourselves in a lot of danger," Farber worries.
"It's very important that we start paying attention to what type of environment we should have. This is not going to happen overnight, because we have 100 million computers out there, all terribly vulnerable. But there are places where the vulnerability is just not acceptable."

Farber shares one story. "My wife and I got married in New York City on the day when there was a big power cut over the whole East Coast--November 9th, 1965. At 5:02 we signed a license, at 5:03, the power went off. It was a very interesting wedding night, and it turned out that it was an architectural problem with the way the power grid was. And it was very tricky to fix."
"Now we have even more threats, hackings and so on. That's a dangerous game," he warns. "This is the 'Silent Spring' issue. People need to understand how vulnerable our environment is."

Epilogue - A Message to Scientists around the World

An issue in the academic community, according to Farber, is that "the brightest students who are at the beginning interested in the whole set of things are trained to focus, focus, focus on a narrow field. And when you become professors, you are expected to be Da Vinci, with broad interests. I think it's a problem, though I don't know how to cure it."
"Also, we have great forgetfulness in the field. We need to make sure that the young researchers understand what has been done in the past."
He starts paraphrasing a quote by Richard 'Dick' Hamming. "There is a saying, 'I have done great things because I have stood on the shoulders of great scientists that precede me,' but as far as computer science is concerned, 'In computer science we stand on each other's toes.' It's so accurate."

"When I look back at my career and look to the future, I think the most important thing I have done, perhaps even more than the research, is related to education of the students of computer science as a professor. As with my children, I have tried to instill in them the attitudes of a scientist and an understanding of being a good human." 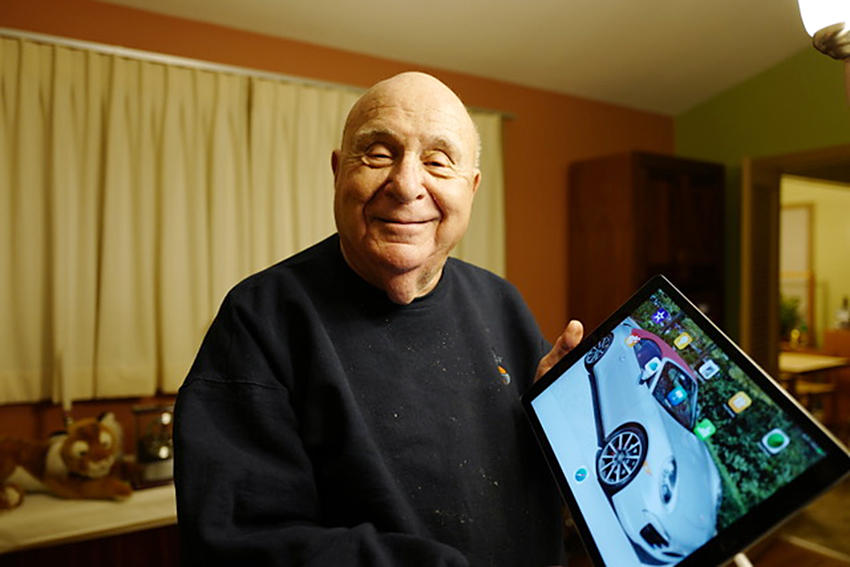 January, 2019 *All affiliations and titles are those at the time of publishing.

David J. Farber's biography
David J. Farber is a Distinguished Professor and Co-Director of Keio University Cyber Civilization Research Center. He is also a Trustee Emeritus of the Board of Trustees of Stevens Institute of Technology. Prior to this, Dr. Farber served as Chief Technologist for the Federal Communications Commission and U.S. Presidential Advisory Committee on Information Technology. He had an 11-year career with Bell Laboratories, followed by significant industry roles at Rand Corporation and Scientific Data Systems, and academic positions at UC Irvine, Delaware University, Carnegie Mellon University, and University of Pennsylvania.

Dr. Farber was elected as the AAAS Fellow by the Council of the American Association for the Advancement of Science in 2018. He is also a Fellow of the Association for Computing Machinery (ACM) and of the Institute of Electrical and Electronics Engineers (IEEE). He was awarded the SIGCOMM Award for life-long contributions to communications and Philadelphia's John Scott Award for Contributions to Humanity. 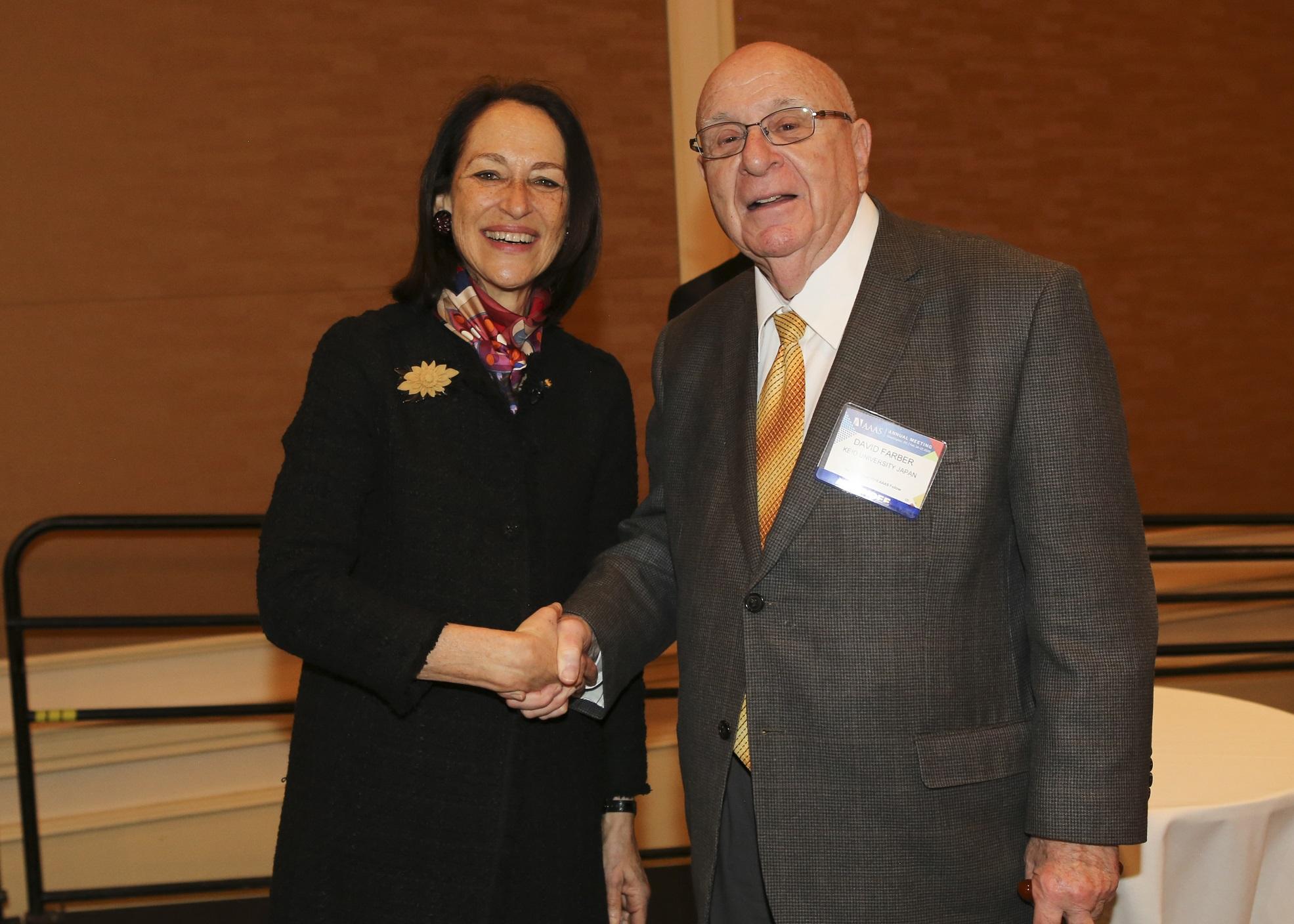 Farber with AAAS President-Susan Hockfield at the Fellow Forum, Feb. 2019 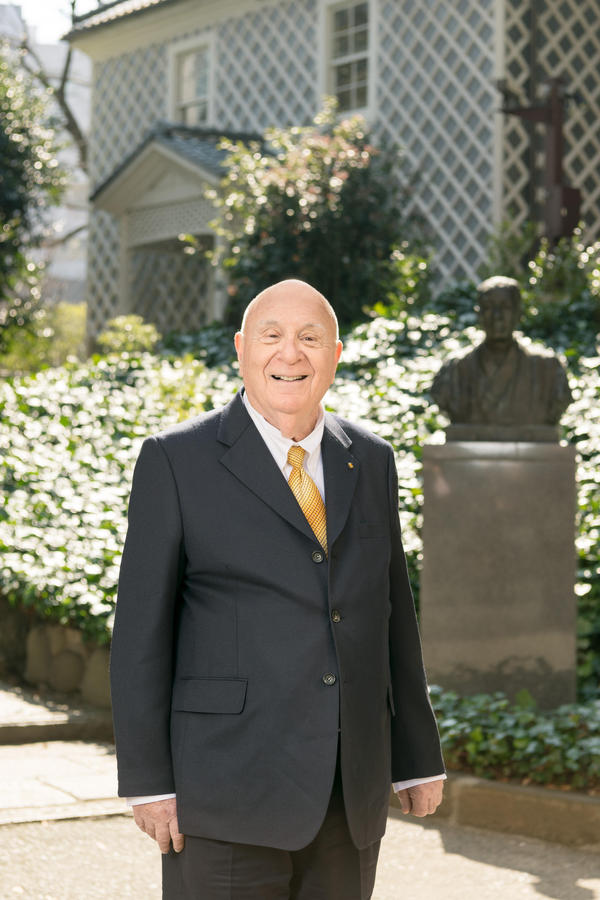 Shot in fornt of Mita Public Speaking Hall (Mita Enzetsu-kan) , Mar. 2019  Photo: Susumu Ishito
Links
(Part 1) - How one Child became the "Grandfather of the Internet" - A Seed Planted in the 1940s
(Part 2) - Beginning of the Tour around Computer Science - How a Seed was Nurtured in 1950s and 1960s
(Part 3) - Stories Behind the Computer Science Network - The Blossoming 1980s