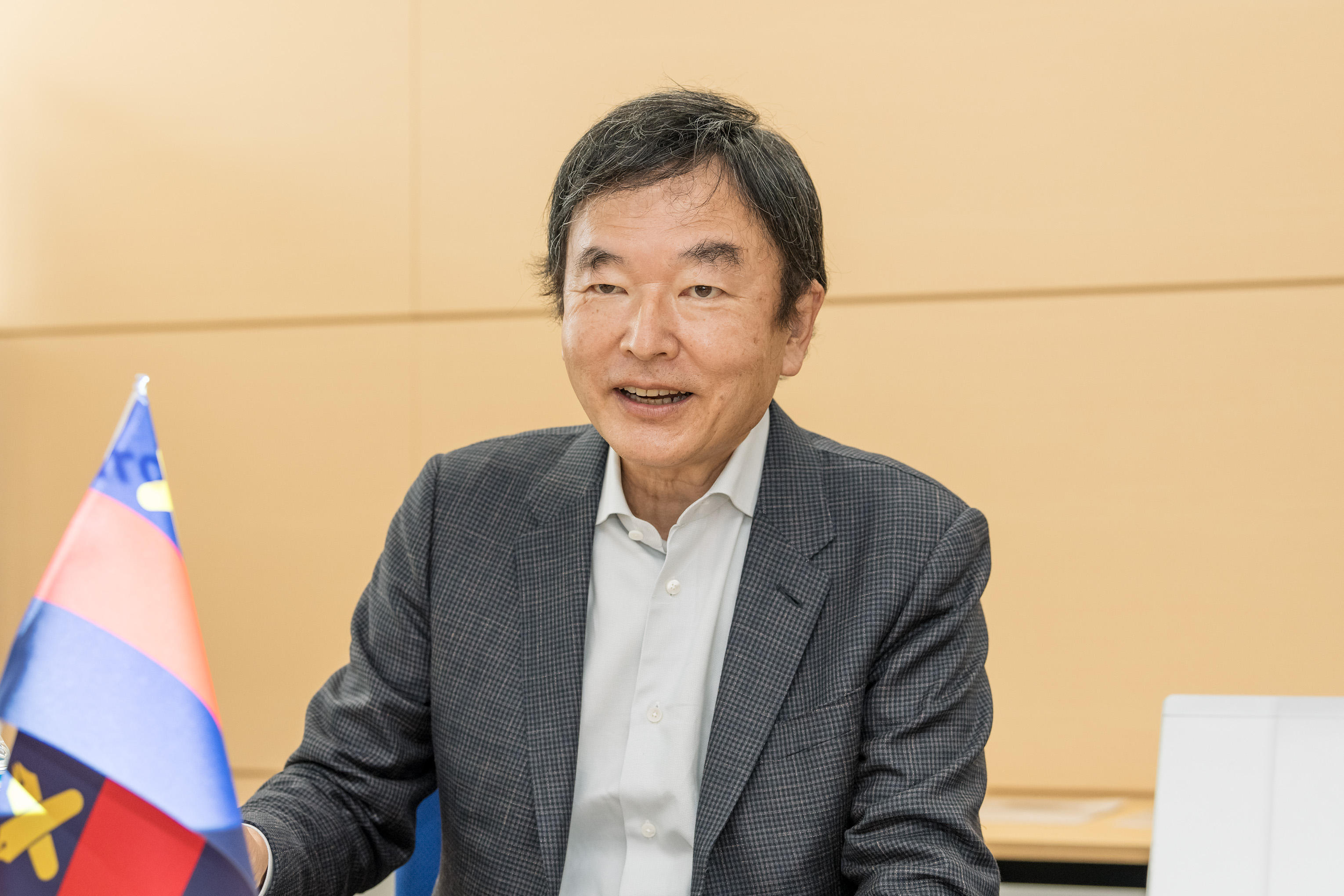 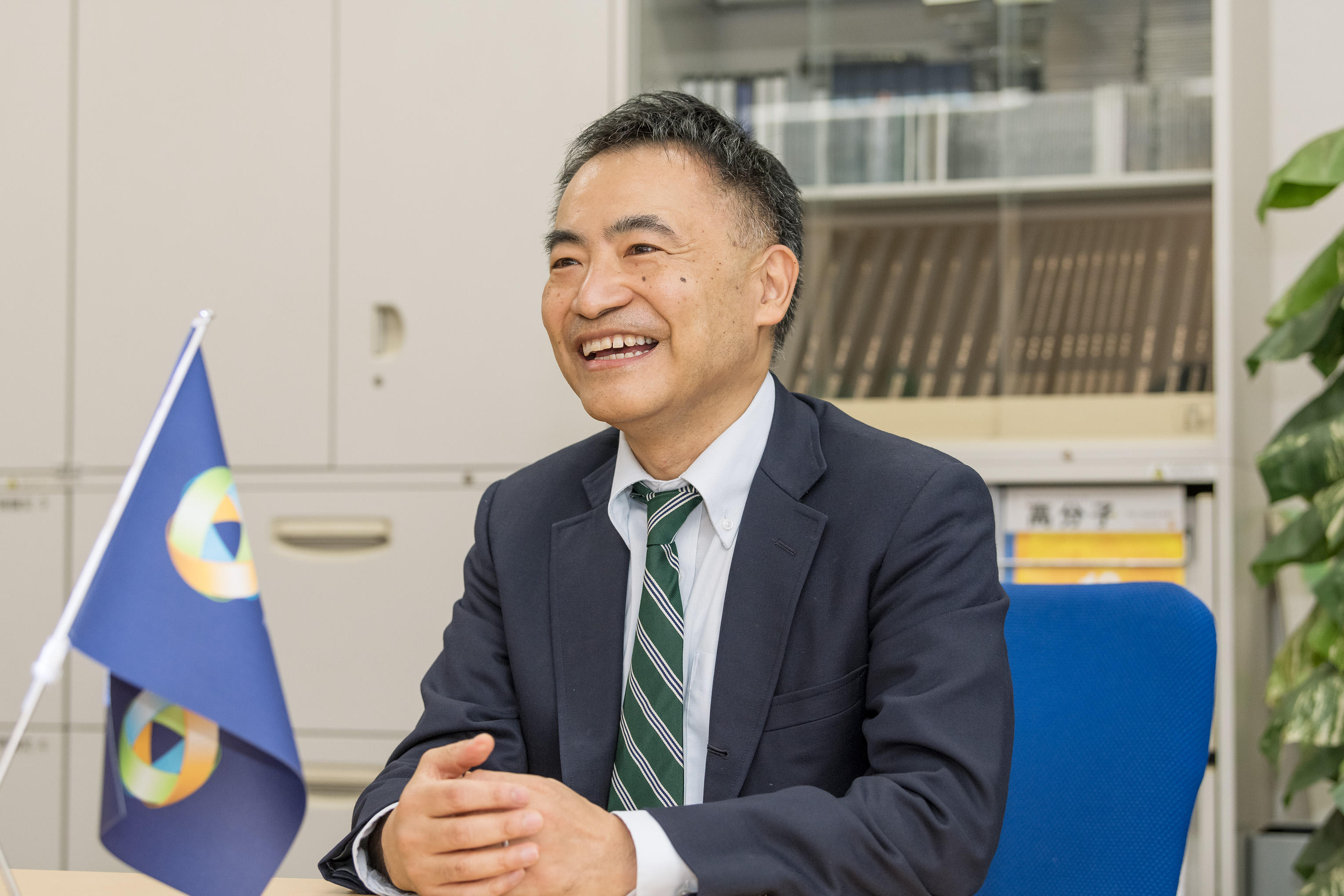 While ultimately invisible to the naked eye, the exchange of vast quantities of information is an indelible part of our daily lives. The web of networks which support high-speed communications spreads throughout the world, with large volumes of data relentlessly journeying to and fro. Meanwhile, the information which thus finds its way to us is rendered visible on displays which produce such high-definition images that they are now virtually impossible to distinguish from the real thing.

Optical fibers are the central player supporting ultra-high-speed communications, constituting a new infrastructure indispensable to modern society, while displays render this information in vibrant, bright, and attractive visuals. Yasuhiro Koike, a professor at Keio University, is conducting research that has been causing a stir worldwide on these two fronts, which at first glance appear completely at odds.

Displays without any degradation of color and optical fibers made from plastic which out-perform those made of glass: what journey has given life to this product of research which appears to violate conventional wisdom with all the appearances of having been created using magic? And what are the potential impacts on society going forward? We spoke to Professor Koike.

The Keio Photonics Research Institute (KPRI), which is headed up by Professor Koike, can be found at Shin-Kawasaki Town Campus (K2) located in Kawasaki City. This organization was created following the selection of research for the Cabinet Office's FY 2009 Funding Program for World-Leading Innovative Research and Development on Science and Technology (FIRST). As indicated by its title of "Creation of Face-to-Face Communication Industry by Ultra-High-Speed Plastic Optical Fiber and Photonics Polymers for High-Resolution and Large-Size Display," two major research strands are conducted within the selected research topic. The first is the development of plastic optical fibers capable of low-noise, ultra-high-speed transmission; with the second being the development of high-resolution, large-size displays boasting outstanding picture quality and functionalities. The mission of KPRI is to make possible online communication that feels almost like meeting in person by fully leveraging these technologies for the exchange of large volumes of information.

"The difference between KPRI and other research labs is that our expertise transcends the boundaries between disciplines. One would be pushed to call this expertise chemistry exactly, and at the same time it is not strictly optics or information science. Our work assumed its current form during approximately 30 years of attempts to deploy these materials to manipulate light," so runs Professor Koike's account. KPRI was initially established as an institute of the Faculty and Graduate School of Science and Technology at Keio University. However, to coincide with the retirement of Professor Koike from the Faculty of Science and Technology at the end of March 2020 and his becoming a university professor from April, KPRI was relaunched as a research project at KGRI. 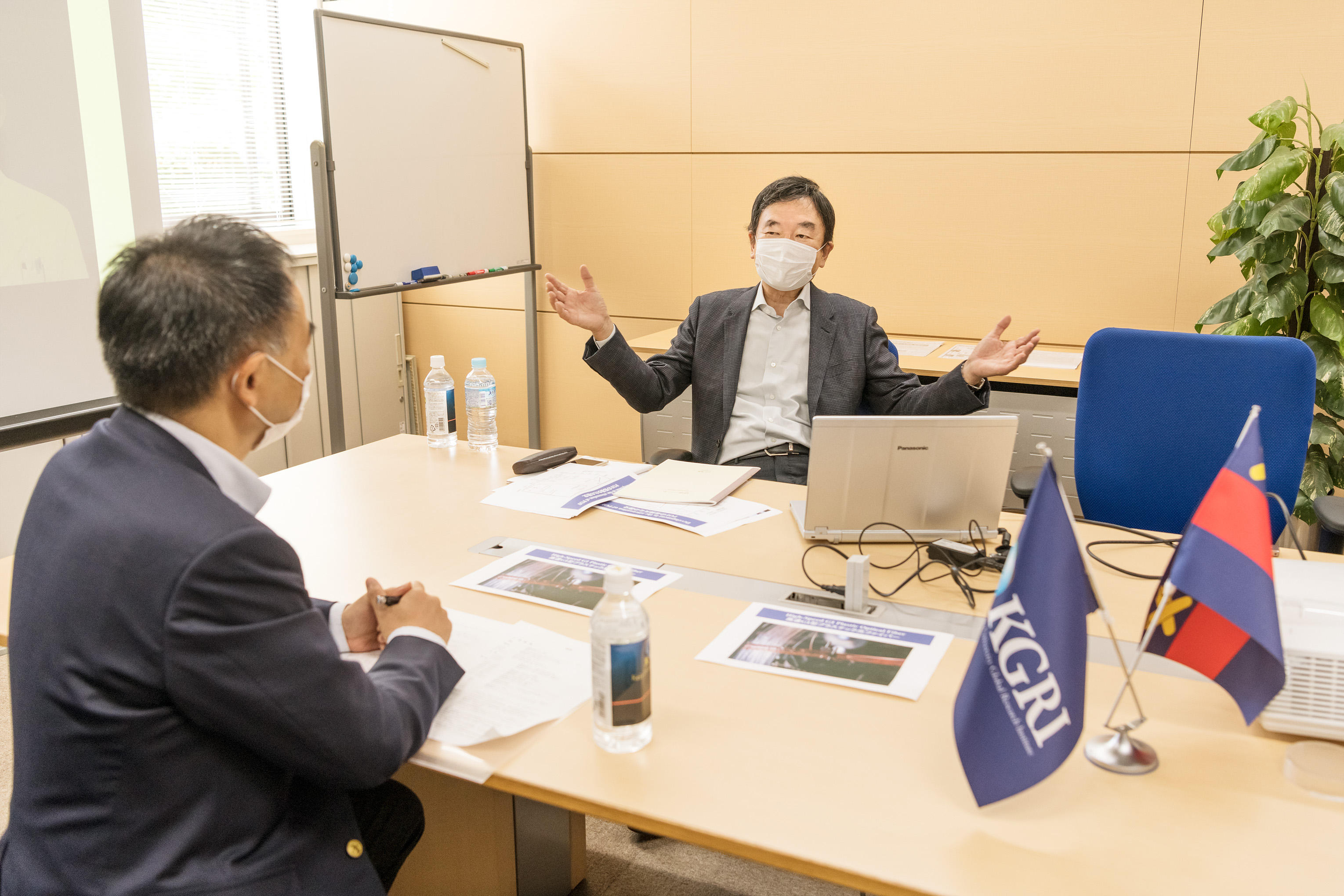 The glass optical fibers which are commonly used today have a minimal data attenuation rate (the amount of light lost between input and output) of information, allowing non-relayed connections over long distances. Because of the need for high precision when connecting, however, they require expensive equipment. Plastic optical fibers meanwhile are low cost and easier to handle; nevertheless, it has to date been the common understanding that they do not perform as well as glass because of their high data attenuation rate.

"We are considering deploying optical fibers in contexts such as data centers handling large volumes of data. I would imagine that most of the cables would be several tens of meters in length. If you were to use glass cables, noise would be generated from even minimal discrepancies due to the highly sensitive connectors. In order to eliminate the noise generated in various places, you use massive volumes of electricity to correct electrical errors, which generates a large amount of heat. The optical fibers made from plastic which we have developed aim to address this problem," emphasizes Professor Koike.

"We anticipate that KPRI's optical fibers will be put to work much as the capillaries in the human body function. While it is sufficient for optical fibers made from glass to function as trunk lines like arteries and veins, I would like for the plastic optical fibers which we have developed to be entrusted with the short, vast-volume networks at the peripheries."

"It is not only specialized data centers; the picture quality of the televisions we are viewing will see an inevitable transition from full-HD to ultra-HD picture qualities called 4K and 8K. Professor Koike expanded by saying that plastic optical fibers will also have a role to play in this context. The metal cables which are currently in use are highly impractical for the handling of 8K information due to their excessive gauge. Deploying our plastic optical fibers will make 100 GB/s transmission speeds possible for cables with a gauge of 5 mm. We have just commercialized a new 4K8K satellite broadcast compatible system using these cables, with coverage of the Tokyo Olympics in mind." 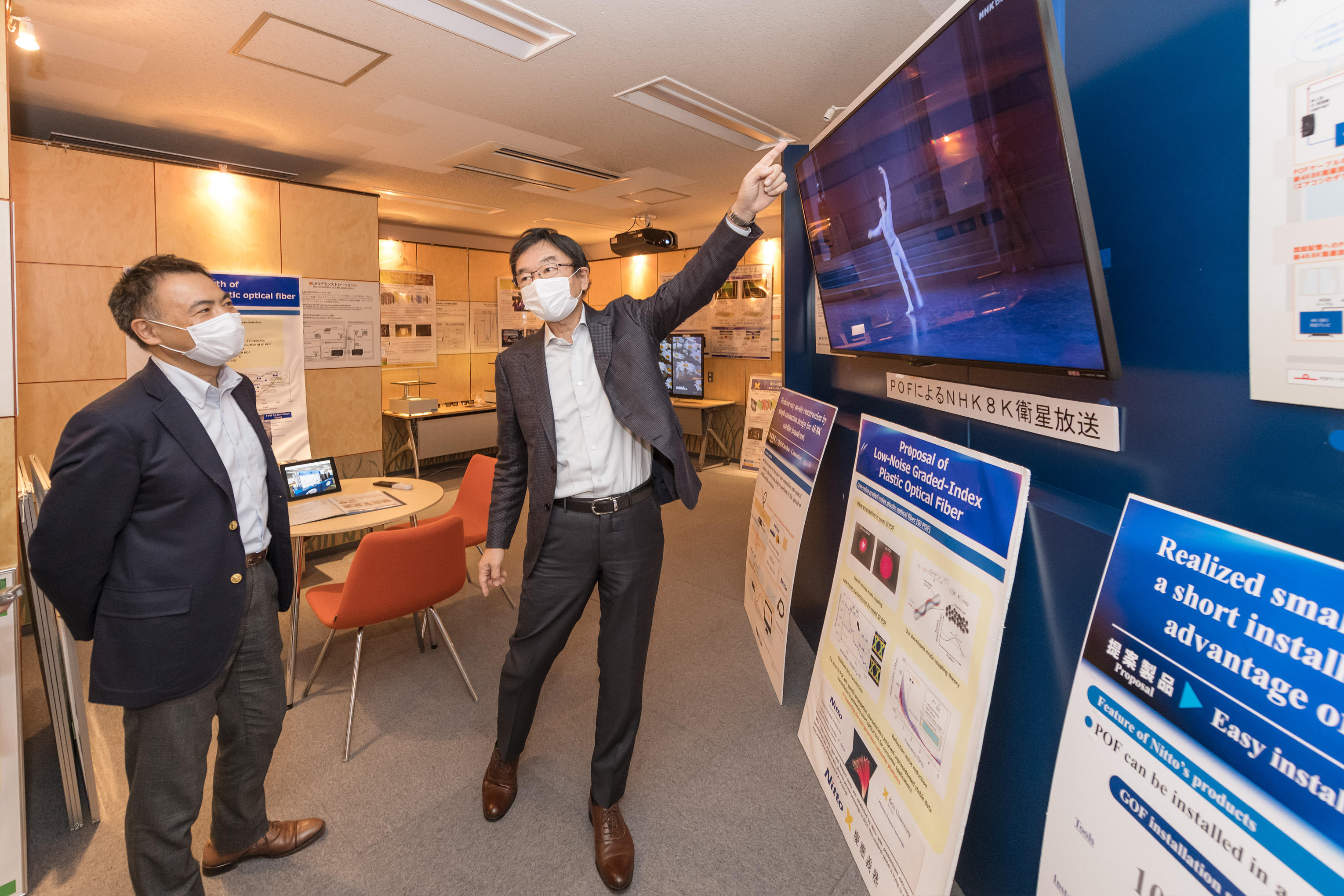 Professor Koike first encountered plastic optical fibers more than 30 years ago, back when he was still a Ph.D. student. He recalls that light could only pass through a few meters of fibers at the time. "My major was applied chemistry, and I attained a doctoral degree in the synthesis of materials which would make fibers, but however much we made these, light simply would not pass through them. This was because scattering would occur on the path through which the light passed."

Digital displays have come to be used in various settings in recent years. In addition to flat screens such as those found in signage panels in cities as well as in smartphones and tablets, curved surface screens including those used in the dashboard panels of automobiles and in roll-up TVs are continuing to appear. The stability of the image quality becomes more important in precise step with the diversification in the ways in which images will be viewed. "Today's displays change color depending on the angle from which they are viewed, with colors mingling due to deflection and changes in temperature, and the screen appearing black depending on the viewing angle when sunglasses are worn. Such phenomena can be eliminated by adjusting for refraction, reflection, and scattering of light as it passes through a film we create. At KPRI we are now successively developing a film to be fitted to displays with practical deployment in our sights," Professor Koike proudly proclaims.

They are also conducting demonstration tests on campus in anticipation of the social implementation of research outcomes. In 2012, the School of Medicine incorporated KPRI's plastic optical fibers and high-definition large-screen displays. This is making it possible to remotely hold lag-free practical training and seminars, which to date could only be taught to small groups in actual healthcare settings, in high-definition for large numbers of people. In addition, the plastic optical fibers created at KPRI have been deployed throughout all floors at an education and research building (34th building) of the Faculty of Science and Technology located at Yagami Campus and completed in 2014, with a view to their multifarious uses in research and educational activities. 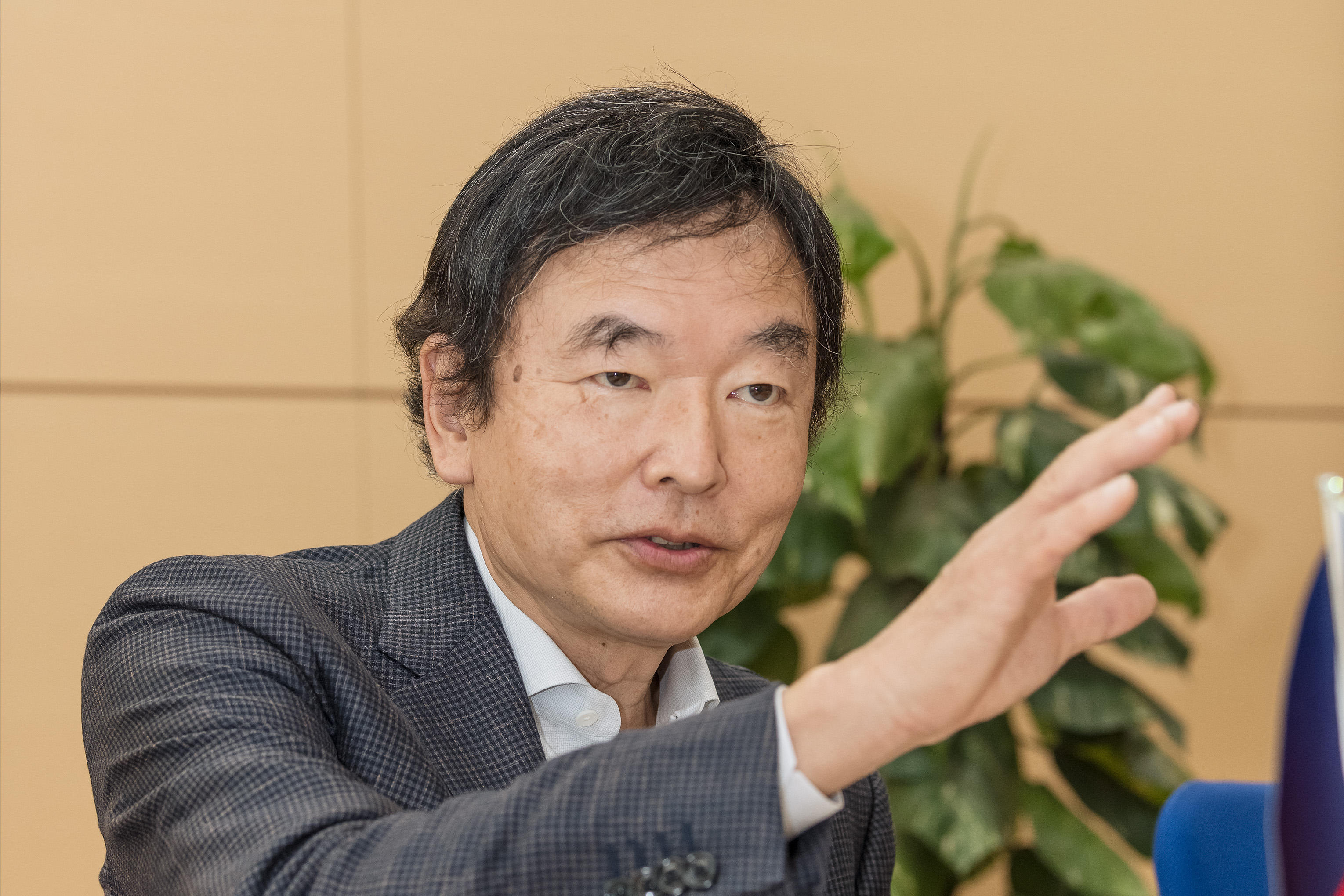 Our target: counterintuitive ideas backed up by science

It appears that Professor Koike, who manipulates the idiosyncratic behaviors of light by sophisticated control of materials to deliver his various research outcomes to the world at large, does not think of himself as dexterous. "Even if what results from this work is different, my role has simply been to devotedly attempt to control the scattering of light by making use of these materials. While I often use the phrase "photonics polymer," this is in fact my own coinage. In English it may be more accurate to call this a photonic polymer or polymer photonics, but in either case this sets up a master-subordinate relationship. My background would incline me to proceed along these lines; however, it is precisely because I wish to emphasize that photonics and polymers are on an equal footing that I make a point of this coinage."

Professor Koike has run into constant barriers attributable to having forged a path of research on which neither chemistry nor optics is dominant. This is the very reason why he insists that his message to early career researchers who will be responsible for what comes next is that "Nothing ever works out from the word go." "I hear the word innovation bandied about, but I sometimes feel that this is being overused without the import it merits. Innovation is not something that occurs so easily. It will not be born of ideas which meet with the approval of teachers or others, nor ideas which are readily understood. Innovation is 'the counterintuitive backed up by science.' This innovation requires the science to back it up and the courage and strength of conviction to follow it through."

In order to return the outcomes of innovative research to society, interdisciplinary fusion will be essential. The question then becomes: how do we fuse the humanities and science in such a way as this fusion caters to prevailing worldly norms and the corporations that provide services? Professor Koike has great expectations for forthcoming developments occasioned by his joining the interdisciplinary framework of KGRI. I aspire to having a platform where people with completely different perspectives can come together to generate ideas toward the solution of major challenges. We want to move forward with our initiatives through encounters with persons who have entirely different perspectives much as you would scramble over a wall after perceiving this as a barrier. 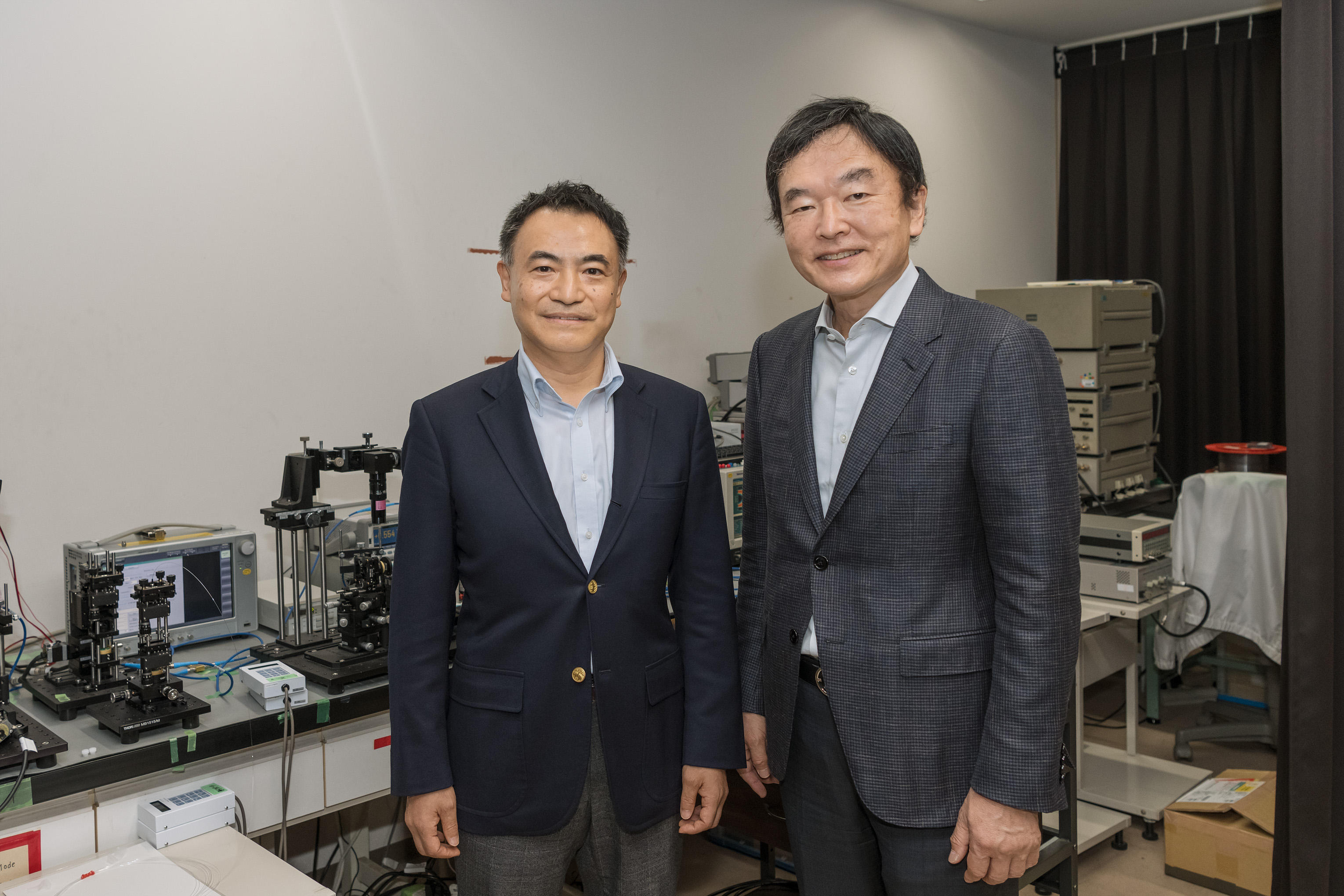 Interview on October 16, 2020 ※Affiliations and positions are those at the time of the interview.